Once at Ayers Rock, a whole world of outback adventure awaits.

Uluru is one of the most iconic natural formations in Australia and it is often the highlight for visitors to the Northern Territory. Believed to be more than 600 billion years old, Uluru (formerly known as Ayers Rock) is a must-see for anyone interested in natural Australian beauty. However, Uluru isn’t the only main attraction in the region, to the east of Uluru you will find a group of interesting domed rocks called Kata Tjuta formerly known as ‘The Olgas’. Tours to these 36 steep-sided bornhardt formations may not be as popular as those to their sister formation Uluru, but are equally as ancient and impressive. There are two walks around the boulders and gorges of Kata Tjuta including the most famous ‘Valley of the Winds’, both of which offer breathtaking views of the Red Centre and highlight its very interesting geological landforms.

To ensure you get the most out of your visit to the Red Centre and experience all there is to see and do, we recommend taking part in an organised tour. See the available tours below. 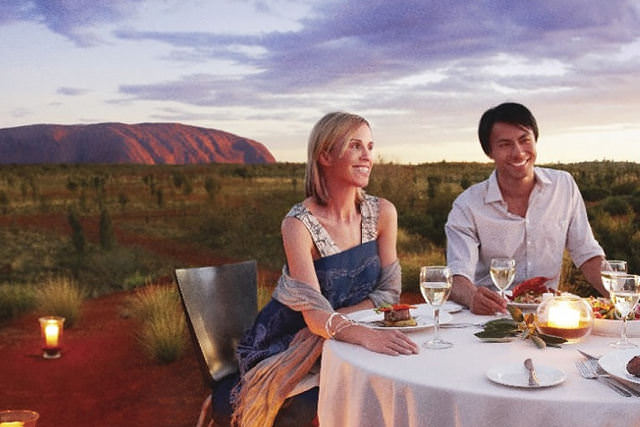 Enjoy wine and canapés overlooking one of Australia’s most iconic landmarks; Uluru. Watch as the sun sets over this impressive formation from the designated viewing areas, just don’t forget your camera. Following this beautiful experience if you opted for the barbecue dinner, you will be whisked away to an exclusive outdoor venue for a gourmet dinner under the night sky. 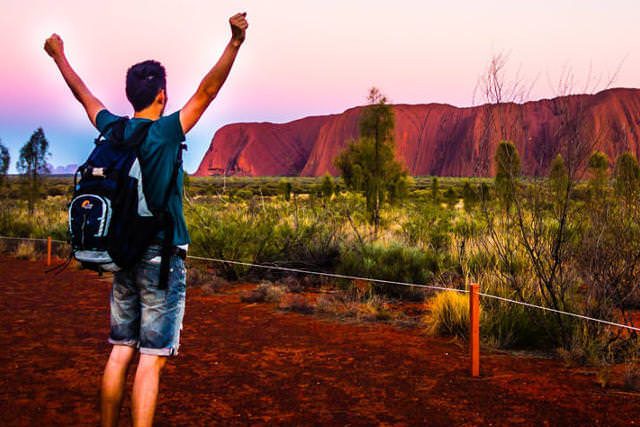 Experience the gorgeous colours of the rising sun behind the iconic Uluru. Departing early in the morning, the tour departs Ayers Rock Resort one and a half hours before sunrise to provide you with sweeping, uninterrupted views of the natural show set to come. Sip on coffee and tea and nibble on biscuits as you sit back and enjoy this spectacular natural performance. 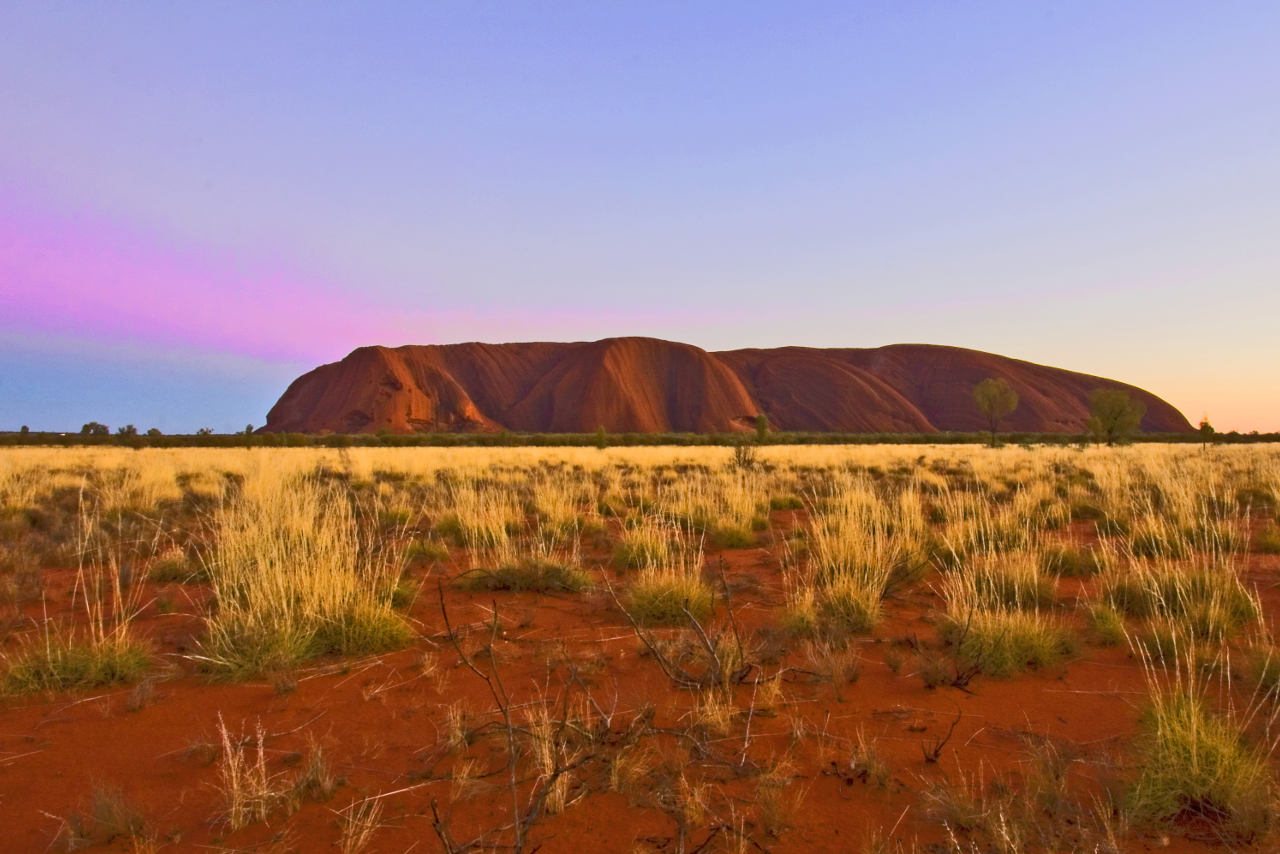 Begin your day watching the sun rise over the impressive Uluru from the Talinguru Nyakunytjaku viewing platform. Following the sunrise, you’ll embark on a walk around the base of Uluru. The walk will take you some of the culturally significant spots and teach you about the history of the region. 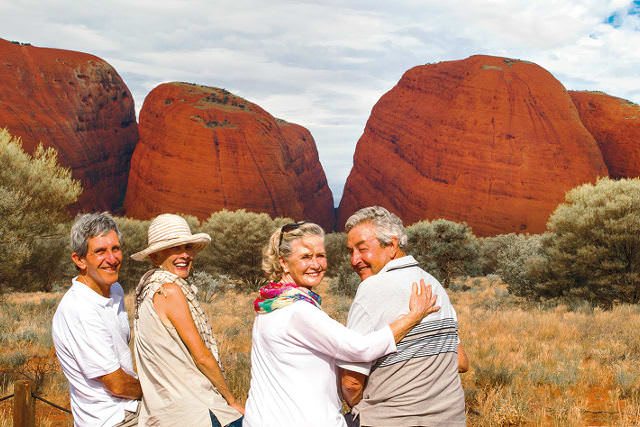 Spend the first half of the day exploring the iconic Kata Tjuta formations within the Uluru-Kata Tjuta NP. Watch the sun rise over these incredible rocks before winding around to the Valley of Winds’ Karu Lookout for spectacular views. The walk through the Valley of the Winds, though at times challenging, is an incredible experience with a magnificent reward. The tour runs for around 7 hours and is suitable for children over the age of 2. This is a great experience for scenic lovers of all ages. 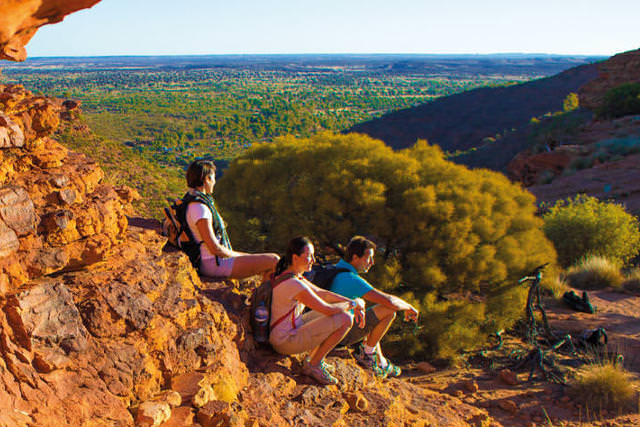 Departing Ayers Rock, head towards Kings Canyon for a full day of exploring with spectacular views of the surrounding outback. Begin the day with a hearty breakfast at Kings Creek Station before embarking on a climb to the rim of the canyon. Under the leadership of an experienced guide, the climb can take up to 3 hours to complete and requires a good level of fitness from attendees. If you aren’t looking for a vigorous adventure you can explore the canyon floor instead. 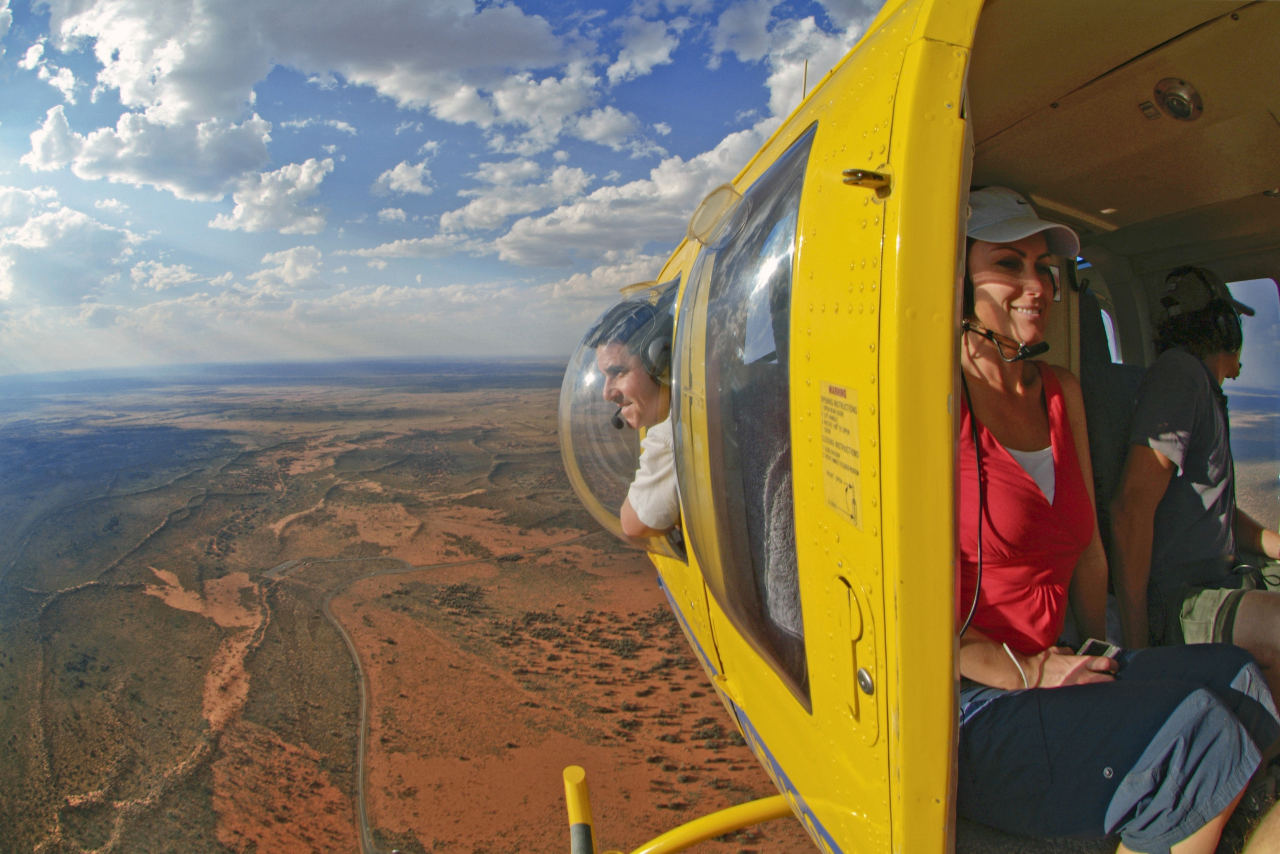 Hover over the iconic Uluru and experience it from a new height aboard a helicopter. This scenic and adventurous flight will rise you up over the Australian outback for spectacular sweeping views of The Rock that will give you a whole new appreciation for its size. With commentary from your pilot and viewing bubbles to help you see better, this is a great experience that has to be experienced to be believed. 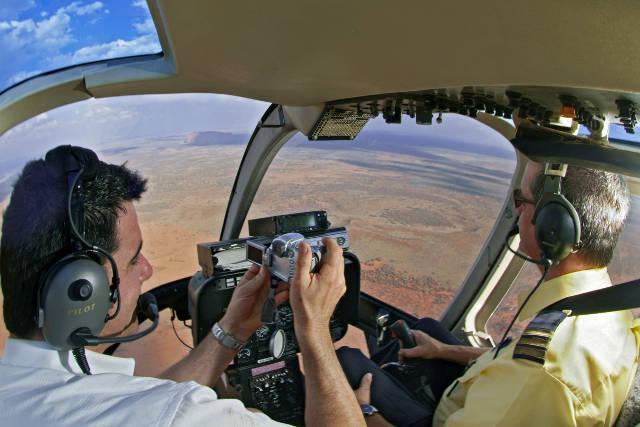 Experience Uluru from above with this 30-minute scenic helicopter flight, a must for anyone wanting to see the entire National Park. To bypass the restricted ground access, this is the best way to get a look at the sheer size of this beautiful part of the world. This is a great opportunity to take photos of these iconic sites while learning about the region with commentary from the experienced pilot. 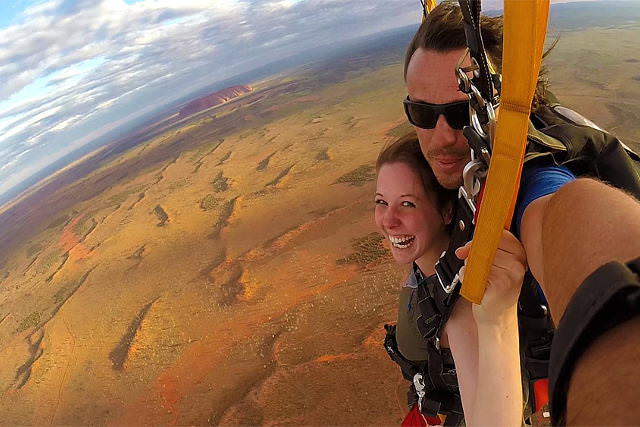 Soar over the Uluru-Kata Tjuta National Park region with a 12,000 ft skydive. A unique experience that is both adventurous and scenic, you will receive unmatchable views of Uluru and the neighbouring Kata Tjuta formations. The perfect Red Centre experience, do a tandem jump on your own or sign a friend up to save money. A great activity for those looking for an adrenalin rush while in the iconic Australian outback. 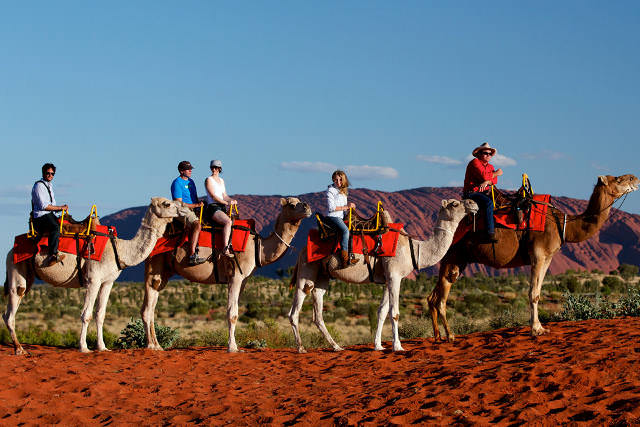 Enjoy a leisurely stroll around the base of Uluru on the back of a camel with this 45-minute express ride. Wth a knowledgeable camel guide leading the way, you’ll pass the two iconic landmarks in the region, Kata Tjuta (The Olgas) and Uluru (Ayers Rock). The perfect adventurous and scenic adventure, this is a great experience for the whole family to enjoy. With a 10:30am start, this tour avoids the early rise but still get a detailed exploration of the region. 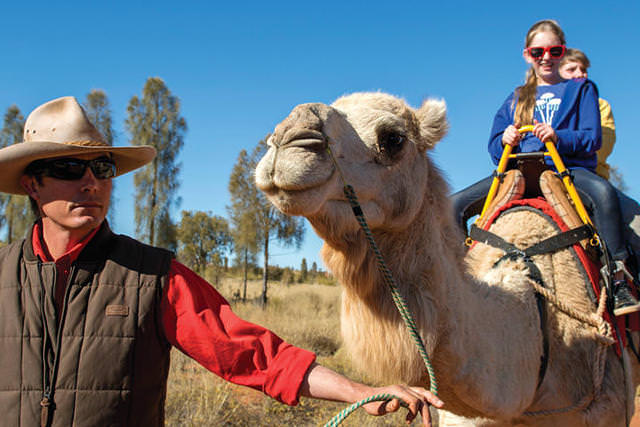 Begin your afternoon with an enjoyable ride on a camels back around the famous Uluru and Kata Tjuta formations. Departing at 2pm, this camel tour will take you around to see the region’s best sites all under the leadership of an experienced and knowledgeable camel guide. A great way to get back to basics and explore the region, camel tours are one of the most popular activities in Uluru-Kata Tjuta National Park. 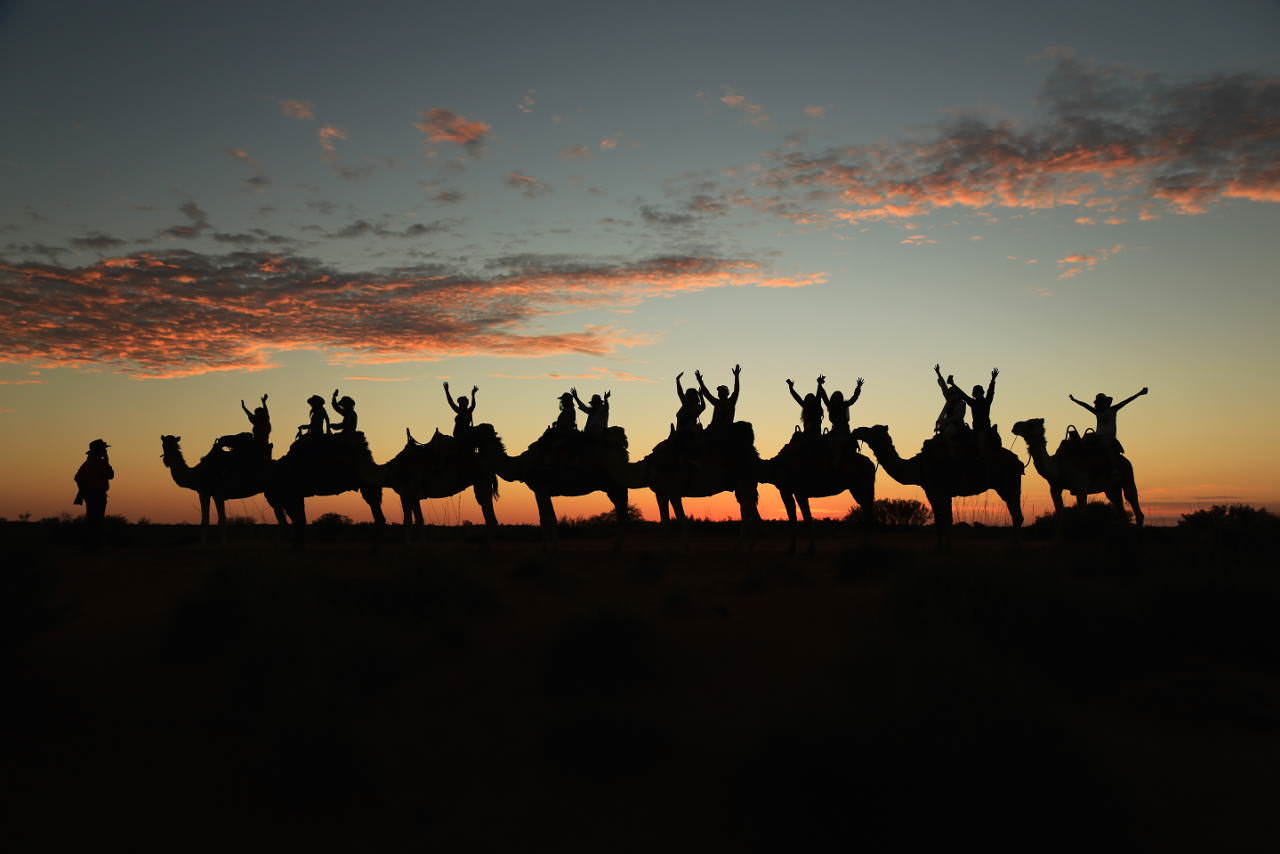 Wake up before the sun and embark on a camel tour around the Uluru-Kata Tjuta National Park. Watch as the park transforms with the rising of the sun into a mutli-coloured wonderland projecting hues of pink, orange and the appropriately coloured, red. With a knowledgeable camel guide, you’ll leave Ayers Rock Resort for Uluru; a 1 hour ride, to experience the beautiful sunrise. You’ll receive a light breakfast with fresh damper to begin your day. 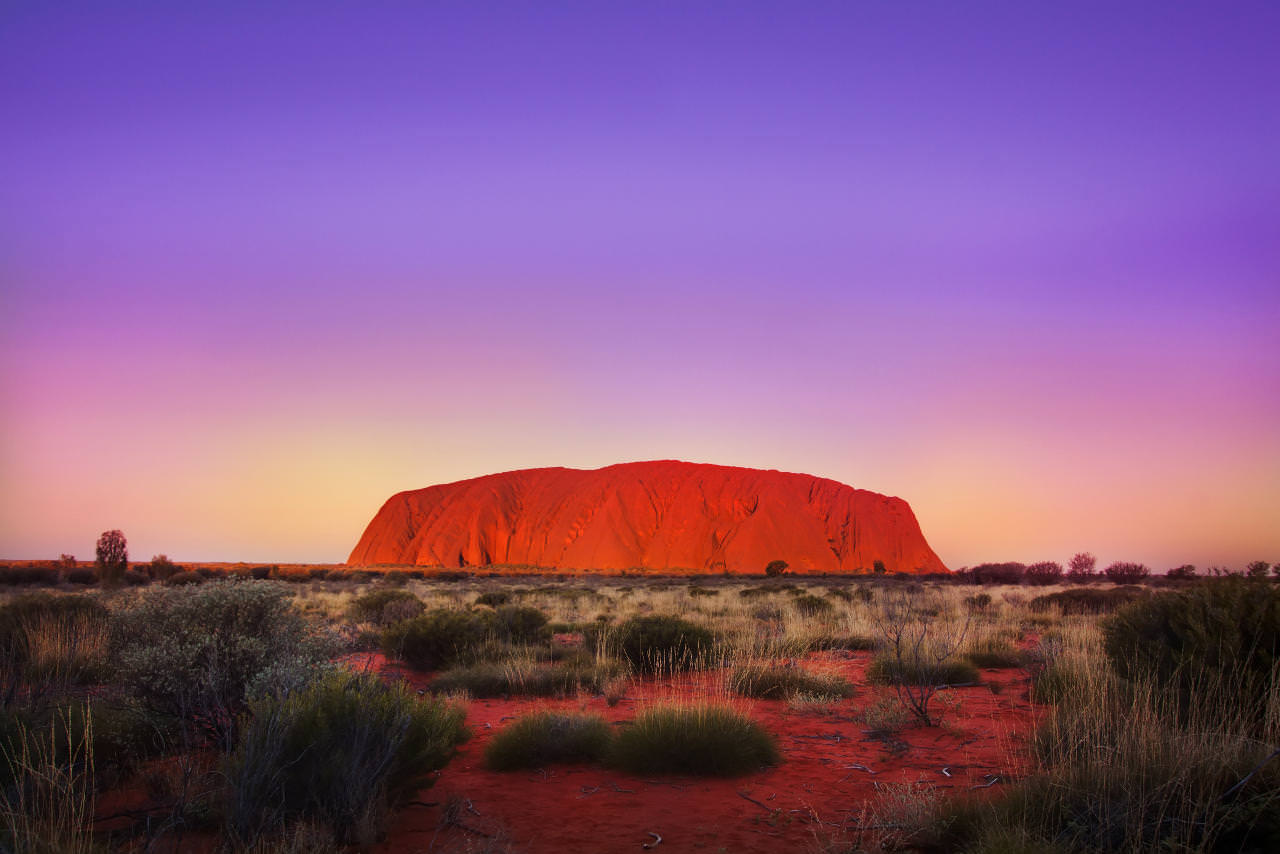 End the day with a camel ride to Uluru to watch the sun set on yet another day in the beautiful Australian outback. Departing Ayers Rock Resort, you’ll embark on a one hours journey on the back of a camel to Ayers Rock in time to watch the sun go down. This is a great experience and adventure for everyone to enjoy, mixing the thrill of riding a camel with the breathtaking beauty of the Red Centre, more specifically Uluru at sunset. You’ll also receive complimentary sparkling wine, beers, soft drink and nibbles to enjoy. 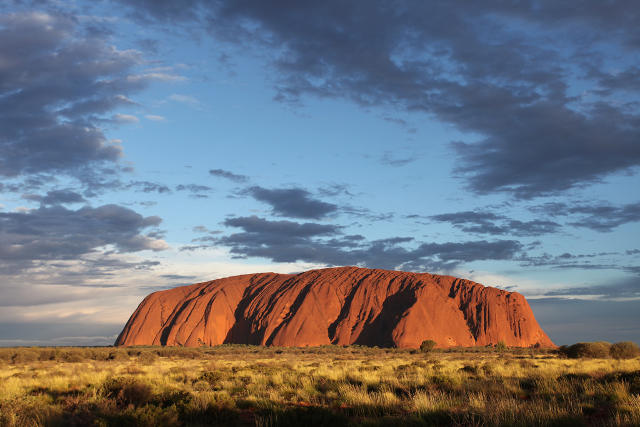 Travel in comfort with a coach transfer from Alice Springs. Some people may be unaware of the distance between the two destinations, so an organised coach tour is one of the easiest ways to travel between the two tourist hotspots. This is only a one-way transfer and under the guidance of an experienced driver you’ll learn about the region with their local knowledge and commentary. Tours depart Alice Springs daily from 7am and arrive around 1pm. 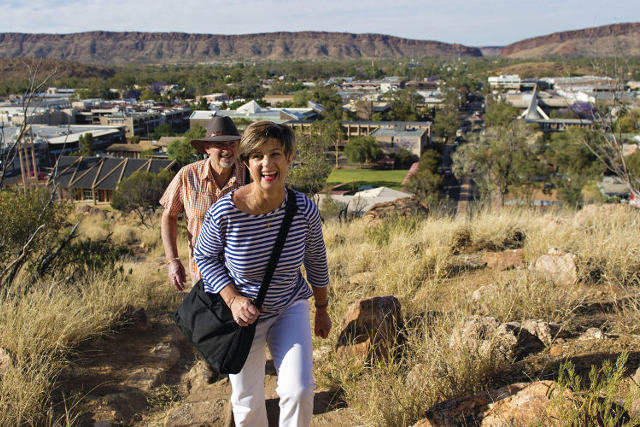 Travel to Alice Springs; the closest township to Uluru-Kata Tjuta National Park, with ease and comfort aboard an AAT Kings air-conditioned coach. Relax as your experienced driver navigates you to Alice Springs while also providing interesting commentary about the region. These tours depart daily from 12:30pm during October to March and from 1pm between April and September.

BOOK TOUR
Tours
Accommodation
About
Browse Things To Do
Attractions

To begin your journey into Australia’s heartland, book online or give our consultants a call on 1300 935 532.
BROWSE TOURS